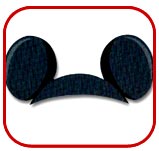 Did you give up??

Q2. "Bella Notte (This Is the Night)" was the love song from what classic Disney animated film?

A2. In "Lady and the Tramp", the title lovebirds shared a plate of spaghetti while "Bella Notte" played on the soundtrack.


Q3. What love song from a Disney film won the Academy Award® for Best Original Song for 1999?

A3. Phil Collins wrote and performed the song "You’ll Be In My Heart" in "Tarzan" and was rewarded with an Academy Award for Best Original Song of 1999.


Q4. One man wrote the music for two classic, Academy Award-winning love songs for Disney films in the 1990s. Can you name him and the two songs that won?

A4. Alan Menken wrote the music for "Beauty and the Beast" from "Beauty and the Beast" and "A Whole New World" from "Aladdin", both of which won the Academy Award for Best Original Song in their respective years. Menken also wrote the music for other classic Disney tunes such as the Academy Award-winning "Colors of the Wind" from "Pocahontas" and "Under the Sea" from "The Little Mermaid."


Q5. The Academy Award-nominated love song "Candle on the Water" was performed by what artist in what film?

A5. "Candle on the Water" was performed by Helen Reddy for the film "Pete’s Dragon." The song was nominated for an Academy Award for Best Original Song for 1977.


Q6. The song "Can You Feel the Love Tonight" was used twice in the film "The Lion King," in two different versions. Who sang the song each time?

A6. "Can You Feel the Love Tonight" was sung by the character of Simba while he and Nala fall in love, and again by the songwriter, Sir Elton John, over the closing credits.


Q7. Mickey expressed his affection for Minnie in the song "Minnie’s Yoo Hoo," which was used as a theme song for the original "Mickey Mouse Club." In what animated short did the song first appear?


Q8. The Academy Award-nominated song "When She Loved Me" is from what Disney film?


Q9. A song simply titled "Love" is from what classic Disney animated film?

A9. "Love" is from the 1973 animated version of "Robin Hood." It was nominated for an Academy Award for Best Original Song.


Q10. Which animated feature had its key love song, "If I Never Knew You," cut after preview screenings?

A10. "If I Never Knew You" was cut from "Pocahontas" before its theatrical release, but it’s included among the special features on the DVD release of the film.


Q11. What love song from a Disney film captured the Grammy award in 1994 for Best Pop Male Performance?

A11. Elton John won the 1994 Grammy for his performance of "Can You Feel the Love Tonight" from "The Lion King."


Q12. The history of honors for love songs from Disney films goes way back. The song "Lavender Blue" from the film "So Dear to My Heart" was nominated for an Academy Award for Best Song for what year?

A13. "Beauty and the Beast" won the Grammy Awards for Best Pop Performance by a Duo or Group with Vocal for Celine Dion and Peabo Bryson, and Best Song Written for a Motion Picture or for Television for songwriter Alan Menken and lyricist Howard Ashman.


Q14. What love song from a Disney film won the coveted Song of the Year Grammy in 1993?

A14. "A Whole New World" from "Aladdin" won the Best Song Grammy for songwriter Alan Menken and lyricist Tim Rice.